Analog Way is pleased to announce Kinoton Korea Inc as its launch partner for Alta 4K in Northeast Asia. Introduced in May 2022, Alta 4K is a new line of powerful multi-screen and multi-layer 4K60 presentation switchers and videowall processors. Based on the Alta 4K platform, the Zenith 100 and Zenith 200 are designed for medium to large-scale live events and permanent LED video wall installations. 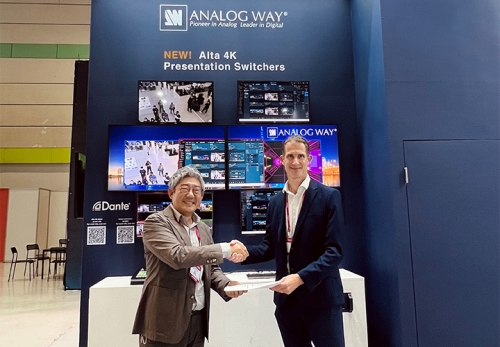 When the Alta 4K was introduced into the Asian market during the KOBA 2022 show, Kinoton's belief in the product was secured. They subsequently signed a contract to commit to a large number of units, which are expected to be delivered by the end of the year.

“After listening to the feedback from our partners at the recent KOBA 2022 show, I am confident that the Alta 4K will set new benchmarks for the premium image processing market,” says Guy de Souza, Analog Way’s Vice President for Asia.

“Kinoton Korea knows the critical role that powerful and reliable image processors play for all video-based commercial projects,” says Edward W.S. Bae, Vice President of Kinoton Korea. “We are delighted to be launch partner for Analog Way in the Northeast Asia region, a further opportunity to work together and help customers maximize video outcome and drive engagement.”

Bae has big expectations for the Alta 4K product line among Kinoton's domestic SI partners, who have been seeking middle-range solutions between Analog Way's Midra 4K and Aquilon RS series.  Alta 4K is the perfect fit to satisfy the demands of their end users in terms of technical and operational requirements and budget preferences.

Since its creation in 2006, Kinoton Korea, Inc. has spearheaded the development of new digital projection/audio systems as well as existing film and conventional audio systems, including special featured audio systems in multiplex cinema markets in Korea and abroad, especially on Asian markets. The company has also expanded its business into digital display systems (LED Display, DID, Hologram etc.), pro audio systems and relevant digital audio/video businesses. Kinoton Korea has successfully delivered digital projection systems, comprehensive displays and special immersive audio systems for the past decade, leveraging the company’s sophisticated business capabilities, and is committed to contribute to the success of its customers as a technical leader in the industry.

In particular, Kinoton Korea is well known as the number one cinema multiplex designer and installer in Korea. Kinoton Korea has been designing, installing and commissioning a large number of projects not only in Korea but also in Japan, China, India, Mongolia, UK, Dubai, Turkey and other locations. www.kinoton.co.kr