High-Dimension Presentation with the Ascender 32 - 4K

During the last K Trade Fair for the plastics and rubber industry in Düsseldorf, Germany, Inovyn, a leading European company in the chemical industry, invited 450 guests to the Inovyn Awards which honor the latest innovations of the sector. For the AV technical production of the event, Inovyn contracted GSF Event, a company that specializes in rental audiovisual equipment, especially in sound, light and video projection. GSF Event worked alongside Event’ives who designed and produced the event. 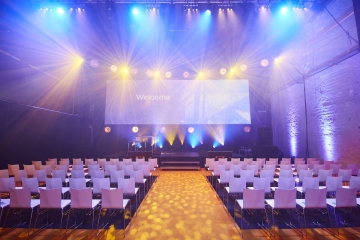 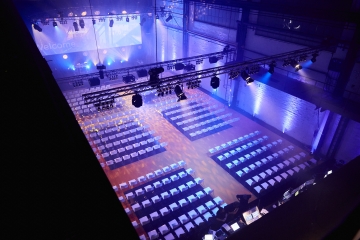 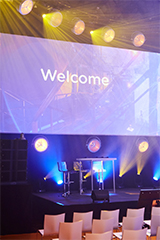 For the background, GSF Event created a 3800x1080 soft edge blending in a former renovated factory. Sammy Freh, owner of GSF Event explains the context, “Presentation and video content in 3500x1080p was especially created for the background; we had to provide a screen of that format.”

To route the content to both Panasonic PTDZ 110 video-projectors, GSF Events opted for the Ascender 32 – 4K, a premium seamless switcher based on the LiveCore™ platform. The Ascender 32 – 4K was a valuable tool in the creation of the soft edge, especially through its test patterns that allowed for quick fine-tuning. According to the GSF Event’s team, the possibility to create and recall presets with ease made a huge difference.

As inputs, the Ascender 32 – 4K supported three Panasonic cameras that filmed the stage and the public, along with two Mac Book Pros in Dual-Link that provided the live content for the background. Two PIPs were inlayed on the background: the first one included the videos presenting the rewarded innovations and the second one included the images from the cameras. Sammy Freh comments on the accuracy of the second PIP, “The background contents contained an empty space dedicated to the live images. This had a specific shape, I mean where the edges were rounded. Through the Cut & Fill functionality, we could crop content quickly and easily.”

To be able to move freely through the room during the event while recalling presets, the team used the AW Toolbox, the app for iPad which was designed by Analog Way to remotely control the LiveCore™ switchers.

In conclusion, Sammy Freh adds, “From the configuration to the show, the Ascender 32 – 4K was the perfect solution for an event of this category. Given live content, we had strong expectations in terms of latency; in other words, it was mandatory to keep a minimal latency to respect the lip sync, which is what the Ascender 32 – 4K guarantees.” 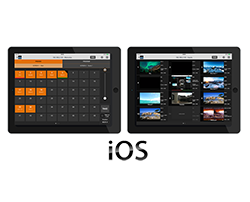