JCM’s DSS CUBE™ modular display in The Grand Hallway, near the resort’s front and side entrances and en route to the event center, draws all eyes to 30 five-sided LED cubes suspended from the ceiling.  The modular 20-inch square cubes feature CreateLED components, which can be joined, stacked or hung.  They display custom graphical content, such as stylized playing card suits and stained glass-like mosaics, in hues of green, blue and red – colors which also wash over the ceiling and upper walls.

JCM’s DSS AirSLIM™ ultra thin panel display in The Grand Buffet is an elevated convex surface featuring a series of size-graded vertical LED strips mounted side by side to span the curve.  Also featuring CreateLED components, the display shows ever-changing custom graphical content to guests dining in the restaurant. 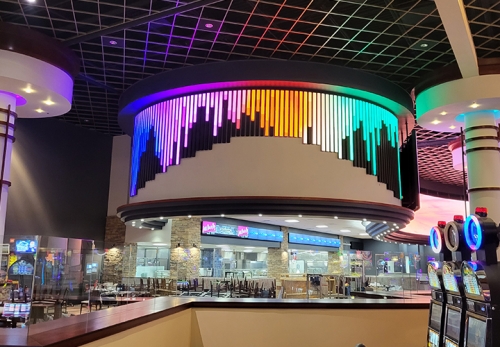 Finding a media server to drive two such different installations posed a challenge.  Initially, another manufacturer’s media server was considered “but that system lacked the flexibility to provide custom resolution support and scaling,” notes Brian Smith, Analog Way’s Midwest and South Regional Sales Manager.  “The casino needed the power of our Picturall solution to drive both installations.  Set it up, hit play and you get rock-solid 24/7 performance with no worries.” 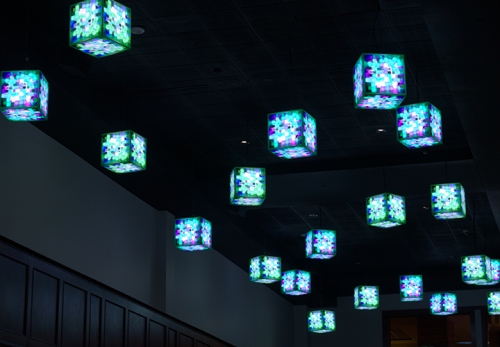 James Smith, JCM Global’s Product Manager, Audio Visual, sent JCM’s own Picturall to the casino to demonstrate its capabilities.  “They loved the way it worked and its ease of use,” he reports.

Ease of use was a particular concern for the CUBE installation; while its original content was created by Render Impact, additional content was developed by a staffer in the casino’s IT Projects department who “found it really easy to create simple graphical content, program it and schedule it through Picturall,” James Smith says.

He was involved with the AirSLIM installation in The Grand Buffet from before there were drawings of the display structure through frame development and installation of the LED strips.  The shortest group of strips is at the center of the curved display with progressively longer strips bookending them as they wrap around the curve.  “With custom resolution above 4K, the display needed Picturall’s processing power to provide for a smooth playback without any dropped frames.”

It took JCM two weeks to complete commissioning of the AirSLIM installation and when the client saw the final results “they were very ecstatic about what they saw,” says James Smith. 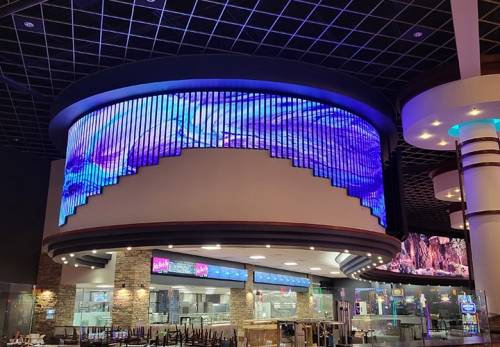 “I’ve been working with Analog Way since becoming product manager here and their customer service, professionalism and equipment have never failed us,” he notes.