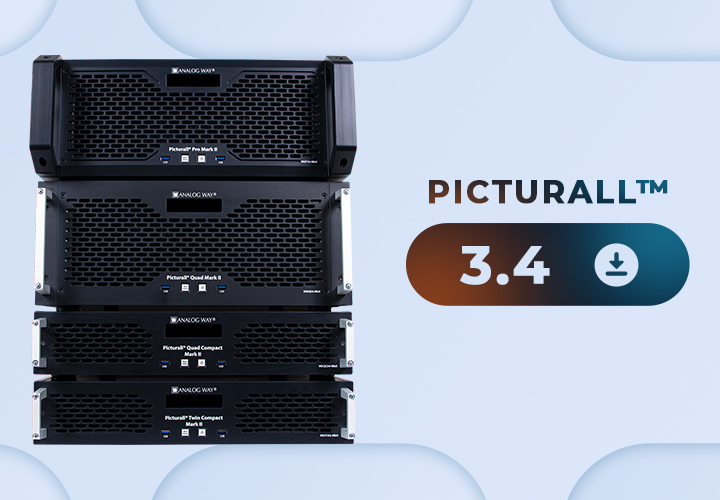 Analog Way announces major updates in the new software release 3.4 for its Picturall™ series of media servers. The new features include support for NDI™ live video streaming (input and output), advanced audio features, synchronized layer timecode over the network and enhanced show and server synchronization for back up.

In addition to support for the latest v5.0 version of NDI™ technology, Picturall media servers that were already capable of receiving multiple NDI streams from the network are now capable of streaming one or more NDI™ streams over the network at up to 4K60Hz resolution, including with audio and alpha channel. Additionally, if a Picturall media server is equipped with multiple video output cards, the NDI™ streams can be configured independently on each output card; certain screens or playback areas or a separate media library can be configured for streaming.

Picturall version 3.4 offers support for multiple simultaneous audio cards and audio output channel mapping. For even more flexibility with the audio configuration, a new advanced audio channel mixer allows the user to configure the media server audio channels to be used as one or more audio sources simultaneously. The audio device used in previously configured audio channels can also be changed using the new audio mixer.

Among the advanced features offered by version 3.4 is the possibility to synchronize a layer timecode with another Picturall media server over network. A Picturall media server can be a timecode provider for more than one server with one or more timecode sources, allowing triggering of show events on another server or having two servers play back in sync.

Version 3.4 also offers a new feature to backup and synchronize the show to one or more Picturall media servers. One or more Picturall media servers can be used to automatically synchronize the server content from the main server. The items that can be synchronized include media files, media libraries, cue data and exported show allowing the backup server(s) to be up to date without needing to manually maintain the backups.

A new web-based firmware manager significantly simplifies the software updates. After updating to version 3.4, updates to any newer versions can be performed over the network with the new firmware management in the web configurator. Additionally, system settings can be saved before the update. USB updates will still be supported.

With these new additions, the Picturall media servers are more than ever the obvious solutions to any demanding video playback need for fixed installations, theaters, broadcast, houses of worship, video rental and live events.

To discover all the benefits of this new software version and to download it, visit the Picturall media servers page.

NDI™ is a trademark of NewTek, Inc. (ndi.newtek.com).