During the international COVID-19 crisis Analog Way’s Picturall media server and its user community have found an innovative way to contribute to help fight the Coronavirus through the Folding@home open-science project.

Folding@home is a distributed computing project for simulating protein dynamics, including the process of protein folding and the movements of proteins implicated in various diseases.  Folding@home software allows people to share their unused computer power with the project, harnessing this power to research even more potential cures.  Folding@home is based at the Washington University in St. Louis School of Medicine along with labs at MSKCC and Temple University.

“The Coronavirus has brought the AV market to a standstill, as AV events and projects around the world, from small to large, are on hold until the situation gets better.  This means that AV equipment is sitting in warehouses gathering dust.  Some of it, such as media servers like Analog Way’s Picturall, is built from high-end components that could be utilized for heavy-duty computing tasks for the time being,” explains Hannu Karhu, Product Manager at Analog Way. 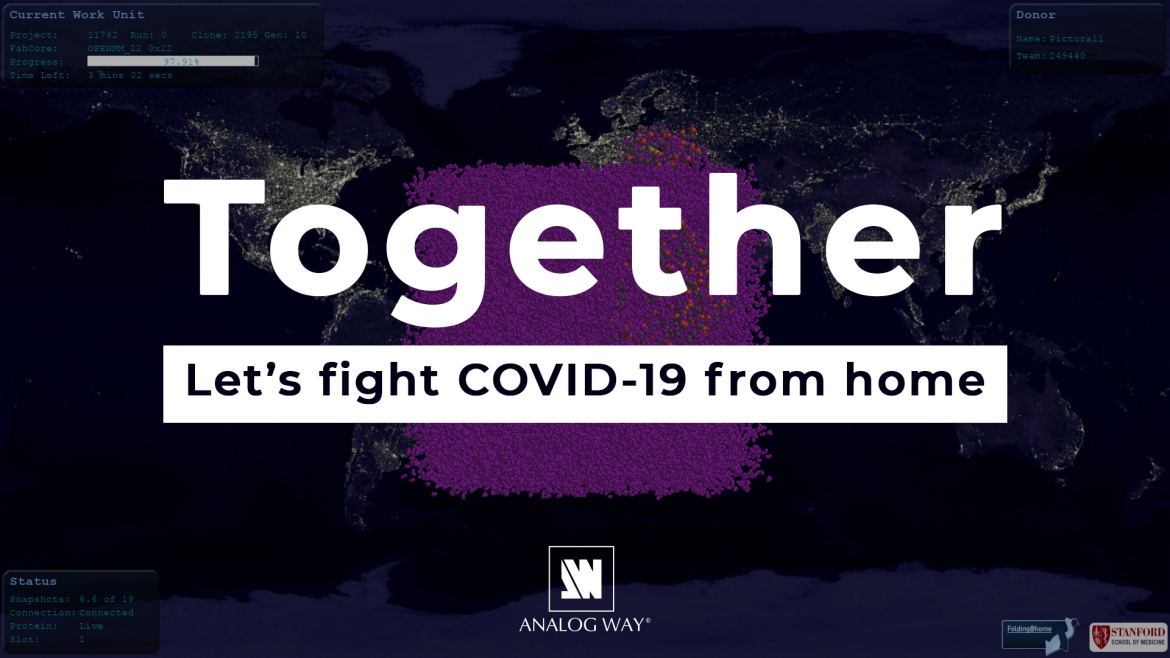 “Folding@home is currently the most used and well known distributed computing project where anyone can provide their home or office computers’ computing power to the joint effort,” he says.  “The project has been researching multiple diseases with a similar method for almost 20 years, but the Coronavirus epidemic has caused a major peak in their user base.”

Karhu points out that the engineering team had been thinking along the lines of contributing to a distributed computing project when customers started to request this type of functionality for their idle media servers.  Folding@home appeared to be the perfect match.

“Folding@home offers great tools and instructions for integrating their client to a Linux-based system such as the Analog Way’s Picturall media server,” he notes. The engineering team started to work on the project and their first working software version was ready March 20.  Almost all the computers and media servers in Picturall’s labs have been participating to Folding@home since.”

An update was tested and released on March 23 with first announcements made to the Analog Way's Picturall Media Servers user groups in social media.  “After that, Analog Way Picturall customers around the world have started to put their media servers to good use with the 2.9.6 Folding@home release,” Karhu reports.