A wealth of new features and enhancements to the LivePremier™ and Picturall™ series as well as a new ergonomic event controller will be on show at the Analog Way stand in Amsterdam.

From 11 to 14 February, ISE visitors looking for high-performance video processing systems should definitively look out for the LivePremier™ series, the award-winning multi-screen live presentation systems, and for Picturall™, the heavy-duty media servers based on Linux. Providing advanced processing technologies, the LivePremier™ and Picturall™ series help deliver uncompromising presentation experiences to high-end staging and premium system integration and accommodate a large range of applications.

With the recently added Aquilon RS alpha, the LivePremier™ series now includes five pre-configured products and two fully-customizable models. In its largest chassis configuration, Aquilon offers up to 24 inputs and 20 outputs and up to 24x 4K layers. Aquilon combines industrial grade reliability, real-time 10/12-bit 4:4:4 video processing power and pure 4K60p on each input and output with ultra-low latency. The system is easy to configure and operate via its cutting-edge HTML5-based user interface. With the native Dante audio routing capability, up to 64 channels of audio can be embedded or de-embedded over a Dante network 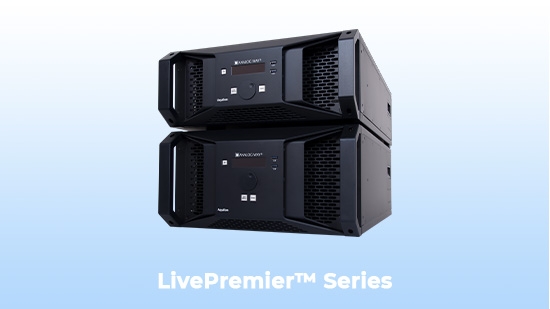 The new major software upgrade v2.0 will be highlighted at booth 3-B130. This version comprises many new features and enhancements, including a fully functional offline WebRCS and device simulator, full HDCP 2.2 support, output rotations, and a major update of the processing engine now compatible with High Dynamic Range (HDR10 and HLG), to name a few. This new version also supports new I/O cards for Aquilon equipped with four 12G-SFP ports and compatible with non-MSA video transmitters and receivers (fiber optic, HDMI, SMPTE 2022, SMPTE 2110). 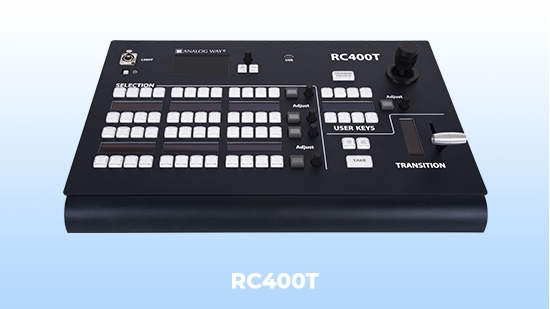 Available to order in February and on show for the first time at ISE 2020, the new RC400T event controller for the LivePremier™ series has been designed to offer an efficient show management system and to give instant access to the crucial functionalities of the LivePremier™ image processor such as screens, layers, sources and presets. The RC400T comes with a rugged design for touring applications and offers 56 user programmable buttons, a high-resolution T-bar and a three-axis joystick for easy and fast PIP sizing and programming.

With the Picturall™ lineup, Analog Way concentrates on high quality, very high-resolution video playback over large-scale pixel canvases. Based on the rock-solid Linux software engine renowned for its extreme reliability, the Picturall media servers deliver rock solid performance and can be easily controlled with an elegant and powerful user interface as well as with any third-party control system via IP or ArtNet. They support multi-GPU playback, offer up to sixteen 4K physical outputs from one server and can accommodate a large range of applications, from massive video wall installations to large corporate events. 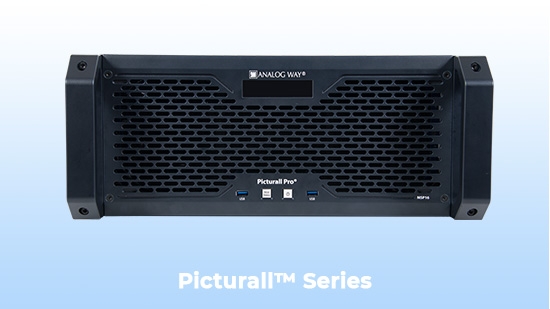 At ISE 2020, Analog Way will be showcasing a major software upgrade v3.0 for the Picturall™ servers, including exciting new features such as the support of the high-performance and high-quality NotchLC 10-bit video codec from Notch (www.notch.one). 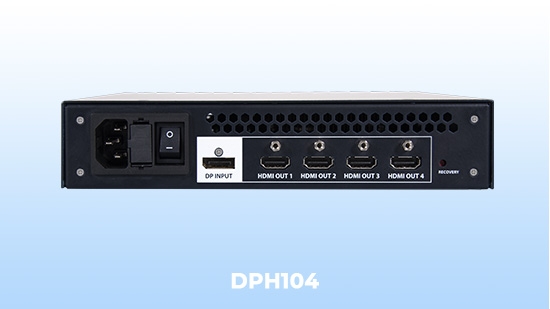 Also available to order in February, the DPH104 is a new high-performance 4K video wall processor able to convert, with no added latency, one 4K DisplayPort output from a Picturall™ media server to four independent 1080p HDMI outputs. DPH104 does not require software or configuration and guarantees an easy and trouble-free installation experience.