AVK Soluçoes Audiovisuais, S.A., an events management company in Amadora, Portugal, has designed a new hybrid video studio with Analog Way’s Aquilon RS4 4K/8K multi-screen presentation system and videowall processor as its centerpiece.  The facility was modified from an existing studio to meet an increased demand from clients for a hybrid events space. 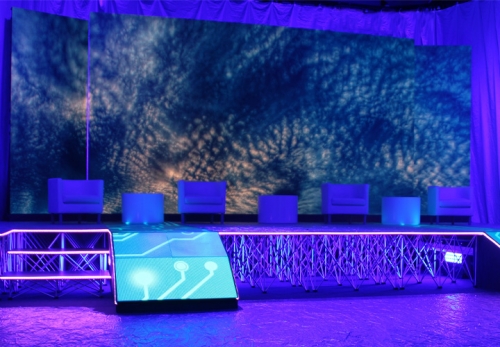 The Aquilon RS4 drives all of the studio’s LED video screens, stage screens, some digital signage elsewhere in the building, as well as the output for the streaming encoder.  It also manages a chroma screen, oracles and all the 4K inputs for backgrounds.

“We decided to invest in Analog Way’s Aquilon RS4 for its capabilities and power,” says Cesar Rosa, Technical Manager at AVK.  And the system has not disappointed.

“Aquilon is performing flawlessly,” reports Rui Fonseca, AVK’s Senior Video Engineer and Project Manager.  “Its power is amazing, and I feel we’re using only half of its potential so far.  The keyer has surprised me a lot, too – I love its flexibility and the amount of pixels it can manage.”.