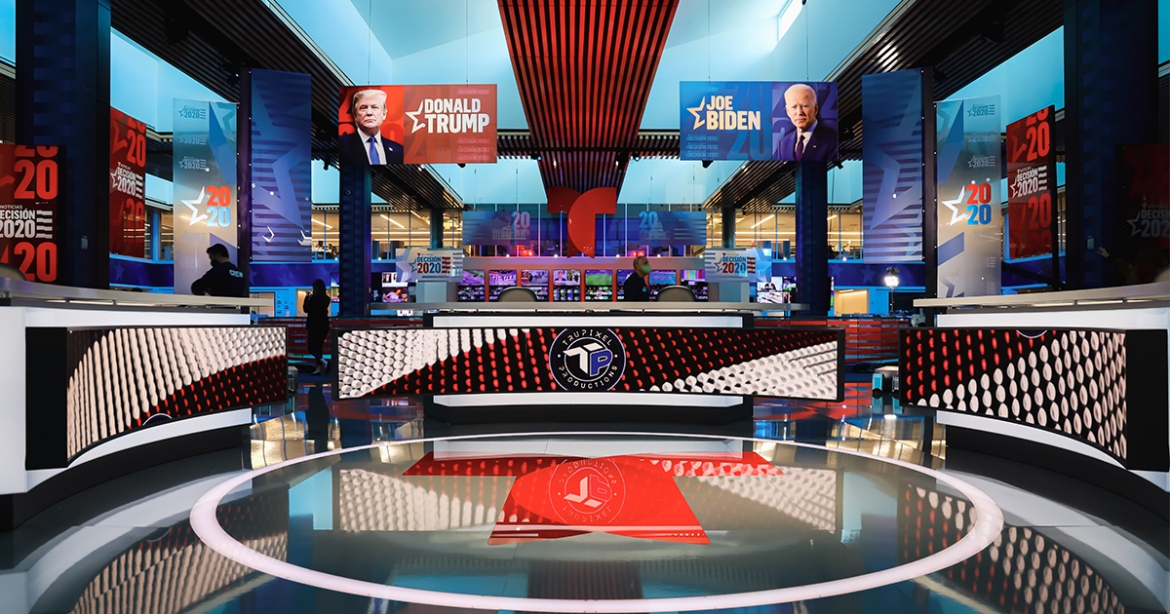 TruPixel was tasked with supplying a turnkey solution for the network, which included processing myriad displays across the on-air set, dramatically lighting the Telemundo building inside and out, and furnishing audio rentals.  Election coverage expanded well beyond the night of November 3 to wrap six days later on November 9.

TruPixel has a long relationship with Telemundo.  The company facilitates the network’s premiere nights of new original content for the press and invited guests and has worked on their Miss Universe pre- and post-pageant remote specials.  Discussions about supporting Decision 2020 began last year.

“As the set design became more complex over time with more displays and more pixels to push we needed a solution that could route all those signals,” says Richard Orizondo, President of TruPixel.  “That was not a problem for us since we had taken delivery of Analog Way’s Aquilon RS2 last November.  With the coronavirus pandemic halting so much production, the election coverage would be the first major use of our new system.”

The Telemundo newsroom was transformed into a stunning on-air set for election coverage.  Anchors were seated behind three curved desks custom crafted by Propmasters of Miami, Inc.  They formed a semi-circle and featured 2mm LED video panels from TruPixel on their front sides facing viewers.

A curved 18 x 10-foot LED videowall from TruPixel was off to one side and a large custom LED touchscreen, built by TruPixel, was on the other side ready to show detailed tabulations of the vote state by state and county by county.

Towards the front of the set two 4x4 Planar LookThru transparent OLED displays, obtained by Telemundo, were side by side.  The high-tech displays could show multiple images or one big image; when they remained transparent cameras could shoot right through them to reveal the set.  The use of LookThru marked the first North American broadcast application for the technology, according to Gutierrez.

TruPixel “used every input and output and both Multiviewers” of the Aquilon RS2 to drive the displays, says Orizondo.  Sources included two media servers and nine live cameras.  “The system interfaced with the control room perfectly.  It just didn’t stop working around the clock as election coverage continued for six days.”

“Everything went flawlessly – as smoothly as I thought it would,” Orizondo says.  “Telemundo called on us to provide a solution for Decision 2020 and we relied on Analog Way, as we always do, to get us through the challenge.”

“When TruPixel bid on the project we knew they’d bring to the table the right technology to drive all the different displays and formats,” says Gutierrez.  “As we tasked Richard with more and more requirements he told us he had the tools to make it happen.  And they worked very, very seamlessly, with no glitches.  Even when the LookThru transparent displays were the last to roll out on the set, five minutes later the Analog Way system was driving them too.”